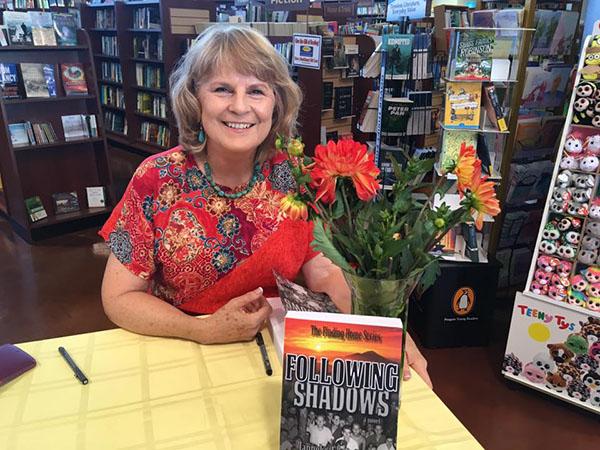 “I hope that Following Shadows, a WWII Family Saga, will transport readers into a different world, in order to emerge changed.”

Jan A. Krancher The Defining Years of the Dutch East Indies, 1942-1949,
Editor and Author:

“It touched me greatly to ‘meet’ the Vanderveers, who slammed the door on these (war)years. As mind-blowing accounts of true history and suffering are revealed, a beautiful bridge is formed: spanning three generations of a family saying what many who experienced these times, wish they could.”

One of the Best Books of 2015—Kirkus Reviews
“Following Shadows takes the reader on a family’s around the world journey. Flashbacks from the father’s boyhood years spent in Japanese concentration camps during WWII are masterfully woven into the present dynamics of the family drama. The daughter’s quest to understand and unravel the past helps her to explore her present-day struggles, bringing her closer to her seemingly distant but loving father.”

“Reading through the story of several generations of Vanderveers, from the Dutch Indies in World War II to Texas fifty years later, with many stops in between, is like reviewing a case of multi-generational war trauma.  We can see how the initial internment in a Japanese prisoner of war camp sheds its repercussions down to the present. Janneke Jobsis Brown has woven together love and war and loss superbly, to not only offer us a fine historical novel, but she has also shown how a single person’s psychological trauma carries us forth into the lives of several generations.”

Such are the thoughts of fifteen-year old Jakob Vanderveer who suffered unthinkable brutality and the loss of his father to the horrors of the Jappen kampen (Japanese concentration camps) in the Dutch East Indies. Upon the liberation of the camps, Jakob vows to keep the atrocities he lived through to himself. In his mind, silence is the only way to move forward, yet his suffering follows him into new life, marriage, and raising a family.

Shadows from Jakob’s time in the camps exacted a terrible toll on his family. Pain, control and anger have woven their way into the fabric of Jakob’s well-meaning yet commanding parenting.

Without full understanding of their puzzling father, Luce hides her fears and alcoholism, her brother Alby’s addictions become deadly, and her workaholic sister Corrie grapples with commitment issues.

Luce, Alby and Corrie do their best to hide their struggles, but their carefully crafted façade crumbles when Alby is on the brink of death from an overdose.

As the family gathers with Alby’s doctor in rehab, Jakob finally begins to reveal his past. With Alby’s brush with death fresh in his mind, Jakob can no longer hold onto the belief that secrets benefit the family.

We must know what our father saw.
We yearn to know what made him the man he is, before it’s too late.

The more Jakob shares with his children, the more a cast-iron wall begins to crack. Jakob’s real-life account of what happened in the concentration camp leaves Luce with a deeper understanding and awareness of her own – and her brother’s – struggles. By coming to terms with their challenging past, the Vanderveers embark on a journey of healing, proving that the human spirit can and will endure against all odds in the search for forgiveness, understanding, and unconditional love.